It all started when Busy Mom, Hope, was a full-time music teacher, mother of one (now two!), a wife and master’s student. With no time to get a home-cooked meal on the table the “traditional” way, she turned to her trusty old slow cooker!  As Hope began bringing delicious looking leftovers into work, her co-workers repeatedly asked for her recipes. One morning, Hope started typing out all of her great slow cooker recipes and that’s how “A Busy Mom’s Slow Cooker Adventures” began!

Hope’s passion for cooking started at a young age while helping her grandma cook and bake. As an amateur chef, Hope strives to bring her readers recipes that any busy mom or dad can handle. With tips, tricks and honest reviews of her recipes (including slow cooker flops) she takes her readers on the adventure right along with her. Hope’s recipes are often seen on BargainstoBounty.com, MoneySavingMadness.com and AllFreeSlowCookerRecipes.com.

Most may not know that in Hope’s spare time, she can be seen on stage in musicals, or singing at weddings, baptisms or church. She enjoys spending time with her two children and fellow music-teacher husband. Becoming a food-blogger has inspired her to begin writing a cookbook, which she hopes to publish in the near future. 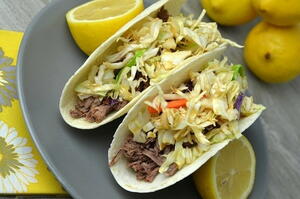 Asian Tacos With An Amazing Flavor

Asian Tacos are a delicious marriage of two of my family’s favorite cuisines – Mexican and Asian. They combine the delicious… See more Continue reading: "Asian Tacos With An Amazing Flavor"